Belmopan is the capital City of Belize and it is located in the rainforest in the geographic center of Belize, near the foothills of the Maya Mountains. It has a population of about 7000 inhabitants, most of whom are public officials, and it is in the first phase of a development period

of 20 years. The most imposing building is the National Assembly of Independence Hill which is stamped with ancient Mayan motif.
Corozal was inhabited around 1850 by Mestizo refugees from Mexico, is now a well-planned community and the center of the prosperous sugar industry in Belize. Just outside of Corozal there are two interesting Mayan ruins: Santa Rita, just 1 mile north of Corozal overlooking the city and its waterfront, and the hills, was once a center of cabotage which can be reached by boat in just 20 minutes across the Bay of Corozal.

South of Corozal is the agricultural center of Orange Walk, where fruits and vegetables can be purchased in markets.
Also to the south it is possible to find the Wildlife Sanctuary Crooked Tree where the Jabiru stork (the largest bird in the western hemisphere), along with monkeys, crocodiles and many native birds can be seen. New River cruises, south of Orange Walk, are available with stops at the Citadel to see the spectacular Mayan ruins of Lamanai and the Temple of the Masks, where visitors can see the enormous head of the sun god, Kinich Ahau, carved in limestone. One of the most famous Mayan ruins of Belize Altun Ha are located 50 km (31 miles) north of Belize City on the Northern Highway.

The site was an important ceremonial and trading center in the Classic period (250-900 AD) and a remarkable head of the sun god, carved in jade, it was found here and is now it is a national symbol of Belize. Mountain Pine Ridge Forest Reserve is located at the south of 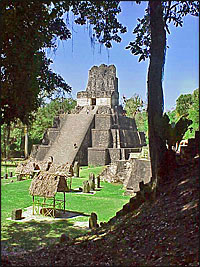 the Western Highway about 115 kilometers (70 miles) from Belize City. It is an area of beautiful views and secluded streams, and contains the Hidden Valley Falls, which plunge 500m (1600ft) in the valley. Inland from Belize City in Belize River Community Baboon Sanctuary is one of the few black howler monkey populations in Central America.
San Ignacio, surrounded by hills, is the administrative center of the Cayo District. Not far from San Ignacio there are several Mayan sites including the magnificent El Pilar and Xunantunich with its 1500 years old, El Castillo, the second tallest building in Belize. The Canaa the Caracol Maya site in Cayo is the tallest building in Belize Maya. This site has been claimed to compete with other famous sites such as Tikal in neighboring Guatemala.

Also in Cayo there are waters of the Pool in the Mountain Pine Ridge Forest Reserve. Near the city of San Antonio, located in the Toledo District inland from Punta Gorda, this Lubaantum Mayan site, where it is possible to meet the famous perfectly carved crystal skull in a vault of the temple.