El Salvador may be the smallest country in Central America,

but still worth exploring. Newcomers to El Salvador are often overwhelmed by an impressive volcanic landscape, and quickly get the warmth of the people of El Salvador.

Volcanoes and beaches of El Salvador:

This small tropical paradise is full of natural attractions, including Cerro Verde National Park, the volcanic lakes of Ilopango and Coatepeque, and stunning beaches, the giant waves of the Pacific Ocean make the coast of Sonsonate and La Union an important and wonderful attraction for lovers of the beach and the sea. The resorts of the Costa del Sol are 90 minutes from the capital. El Salvador also offers interesting archaeological sites of Mayan civilization, and the Ruta de Las Flores takes visitors to some of the most beautiful villages and market towns.

While the civil war and a succession of natural 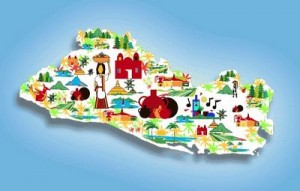 disasters left devastated and psychologically and physically traumatized Salvador. Anyway, nowadays The country El Salvador is in a rapid recovery. Tourism in El Salvador has become a priority for the government of El Salvador: New initiatives include a golf course and fishing complex in Usulutan, an adventure resort in the mountains of Chalatenango, and a marina in La Libertad .While crime remains a problem, the National Civil Police (PNC), have a good reputation in general, and security for tourists has improved with the introduction of a tourism police force specially trained Politur called operating in destinations throughout the country.

El Salvador is located in Central America, bordered to the north and west by Guatemala, north and east by Honduras and south and west by the Pacific Ocean. Most of the highlands of the country is volcanic, which run along nearly two parallel rows of volcanoes, the highest peaks are Santa Ana in 2365 m (7759 ft), San Vicente in 2182 m (7159 ft) and San Salvador at 1,943 m (6375 ft) volcanic activity has resulted in a thick layer of ash and lava in the highlands, creating a rich soil, mineralized, ideal for coffee plantation.