Spanish settlers established sugar cane and snuff as primary products of Cuba. As the native Indian population died out in Cuba, African slaves were imported to work on plantations. Slavery in Cuba was abolished in 1886.

Cuba was the last major Spanish colony to achieve

independence after a 50-year struggle that began in 1850. The final push for independence began in 1895 when José Martí, Cuba’s national hero announced the “Grito de Baire” (“Call to Arms of Baire”). In 1898 after the USS Maine sank in Havana harbor in February due to an explosion of undetermined origin in the United States entered a war. In December of that year, Spain ceded control of Cuba to the United States with the Treaty of Paris. On May 20, 1902 the United States granted independence to Cuba, while retaining the right to intervene to preserve the independence of Cuba and stability under the Platt Amendment. In 1934, the amendment was repealed and the United States and Cuba reaffirmed the 1903 agreement which leased the Guantanamo naval base to the United States. The treaty remains in force and can only be terminated by mutual agreement or abandonment by the United States.
The origins of the population is Spanish (more than 35%), African (over 10%), and the mixture of Spanish, African (over 50%). In Cuba, Spanish is spoken and Roman Catholicism, the dominant religion, is tolerated by the Marxist government. Santeria, a faith of African origin, is also practiced, and there are a growing number of Protestant evangelical churches. The main institutions of higher education are the University of Havana (founded 1728), La Habana, Universidad de Oriente in Santiago de Cuba, and Universidad Central de Las Villas, Santa Clara. Castro declared Cuba a socialist state on April 16, 1961 and for 30 years Fidel Castro had a close relationship with the Soviet Union until the advent of perestroika and the subsequent demise of the USSR. During that time, Cuba received substantial economic and military aid from the USSR – generally estimated at 5.6 billion U.S. dollars annually – which kept its economy afloat and enabled it to maintain a huge military establishment. 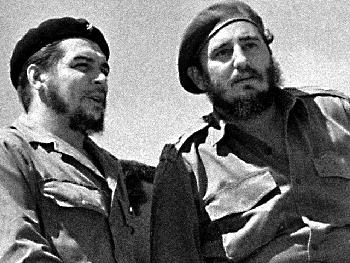 In 1962 Cuban-Soviet relations took a direct confrontation between the U.S. and the Soviet Union during the installation of nuclear missiles in Cuba. The problem was solved only when the USSR agreed to withdraw the missiles and other offensive weapons in Cuba. Soviet subsidies ended in 1991 with the aim of the Soviet Union. Former Soviet military personnel in Cuba – with about 15 000 in 1990 – were withdrawn in 1993.
Russia still maintains a signals intelligence facility at Lourdes, and has provided funds to preserve the thermonuclear plant, still incomplete, Juraguá.