Once the site of the impressive Mayan civilization, Guatemala was conquered by the Spanish conquistador Pedro de Alvarado in 1524 and became a republic in 1839 after the United Provinces of Central America collapsed. From 1898 to 1920, dictator Manuel Estrada Cabrera ran the country, and from 1931 to 1944, General Jorge Castañeda Ubico was his great ally.

Guatemala’s civil war continued in a number of deaths to the citizens of Guatemala.

After the overthrow of Ubico in 1944 by revolutionaries, a group of leftist students and professionals with liberal-democratic coalitions led by Juan Jose Arevalo (1945 to 1951) and Jacobo Arbenz Guzmán (1951a 1954) instituted social and political reforms strengthening of farmers and urban workers at the expense of the military and large landowners companies like States United Fruit Company. With the U.S. covert support, Colonel Carlos Castillo Armas led a coup in 1954, and Arbenz took refuge in Mexico.

A series of repressive regimes continued to rule the country of Guatemala, and by 1960 the country descended into civil war between military governments, right-wing paramilitaries and leftist rebels that would last 36 years. This was the longest civil war in American history. The death squads killed some 50,000 leftists and political opponents during the 1970’s. In 1977, the U.S. cut off military aid to the country because of its atrocious human rights violations. The indigenous Mayan Indians were. At the end of the war, 200,000 citizens were killed.

A succession of military juntas dominated during 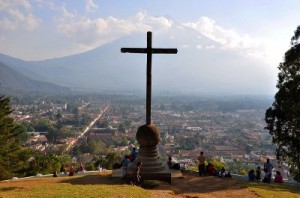 the civil war, until a new constitution was approved by the civil and Marco Vinicio Cerezo Arévalo was elected president in 1986. This Fune followed by Jorge Serrano

Elías in 1991. In 1993, Serrano moved to dissolve Congress and the Supreme Court and suspend constitutional rights, but the military deposed Serrano and allowed the inauguration of Ramiro de Leon Carpio, former attorney general of human rights. A peace agreement was finally signed in December 1996 by President Alvaro Arza Irigoyen.

In 1999, a truth commission in Guatemala blamed the army for 93% of the atrocities and the rebels (the Guatemalan National Revolutionary Unity) 3%. The former guerrillas apologized for their crimes, and President Clinton apologized for U.S. support of right-wing military governments. The army has not acknowledged his guilt.A Alfonso Portillo Cabrera became president in August 2000.En January 2000, Portillo apologized for the abuses of the previous government and pledged to prosecute those responsible and compensate the victims.