Surrounded by the Sierra del Purial, Baracoa is a city located on the Bay of honey. Baracoa is a part of the province of Guantanamo in eastern Cuba. Founded by Diego Velázquez de Cuéllar,

this city was the first capital of Cuba.
Baracoa has many tourist attractions. Matachín Fort is a museum built in 1802 and the very strong structure serves as the highlight of the museum. There are also plenty of hotels in Baracoa, one of which is the Hotel El Castillo. Other popular hotels are the Hotel Porto Santo, the Hostal La Habanera, and the Hotel La Rusa.
Music is a part of this remote town. Tourists often visit Cheese Flan. However, a more traditional music would be the House of Flan. A few feet away, a lot of waterfalls can be seen in the river Toa. Also found in this city the Caribbean’s highest waterfall, Salto Fino. In Guantanamo, 20 km north is the Alejandro de Humboldt National Park. Baracoa reach is not as difficult as most people think. 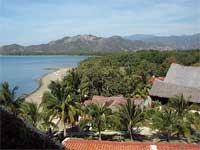 Although Baracoa is located at the tip of Cuba, Baracoa can be reached by bus from Santiago de Cuba or by plane from Havana. The Gustavor Rizo Airport is the region that normally operates domestic flights. Tourists can fly with the airline Cubana to reach this area for a very reasonable price!
Baracoa is home to indigenous and unique dishes. Popular dishes in this city are Cucurucho and Bacan that are cooked with native ingredients.