Now people can be aware that Haiti exists because of the recent earthquake that hit the country. But perhaps it would be good to take note of the other cities in

this country, which happen to be amazing for any tourist attractions in the world. And just one of the cities of Haiti is so surprising Jacmel. Jacmel is a port city in Haiti and is represented as a relaxed coastal town. This is a three-hour drive from the city of Port-au-Prince and can also be reached by air.

The people are very charming, and most people are merchants of coffee. Also in Jacmel are mansions that have strongly influenced the architectural style of buildings in New Orleans. But in truth not much has changed in Jacmel from the 1900’s.
The city of Jacmel or Yaquimel, is famous for its 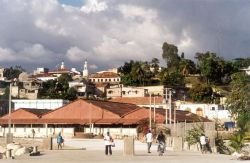 handicrafts and animal masks made in paper mache. The adventurous traveler will have a great time going through different colonial houses and impressive structures in the city that dates back to the early 1800.También can visit the beaches of Raymond Les-Bains and the Congo Black Sand Beach while in the city Jacmel. There are also tourist attractions in some places in the mountains, for example there is a natural pool of clear and transparent waters, waterfalls that invite you to take a dip eager. To reach this area however, must have a guide with you as they are the only ones who can show the route.

Many people visit the city of Jacmel, for its tranquility and security of the people and especially as Jacmel is far from the bustle of the city.