Antigua is in the heart of Guatemala: the country

includes many spectacular Maya archaeological sites, and pine-forested hills of the highlands are home to Mayan communities that still use traditional fabrics. Guatemala has around 21 different ethnic groups speaking some 23 languages.

Maya monuments intensify a mystery that floats in the air: the Mayan civilization ruled much of Central America from the V century until the eighth century. The Spanish conquistador Cortes then invaded Guatemala 17.The century country enjoyed relative stability since independence, but eventually fell into a civil war between the exceptionally savage right-wing military governments and leftist guerrilla movements.

Even the cities of Guatemala have been cataclysmic. Three attempts to establish a capital before Guatemala is founded in 1775, were frustrated by battles with Indian warriors and repeated earthquakes.

But nature has also formed views, including picosvolcánicos, rainforest and sulphurous lakes. And despite the often savage history of Guatemala, visitors are greeted by the sincere friendship of its people. The indigenous culture persists: If you thought that the Maya were wiped out centuries ago, you may be surprised to encounter a few on his trip – which constitute nearly half of the population.

Guatemala is in Central America, bordered to the north and 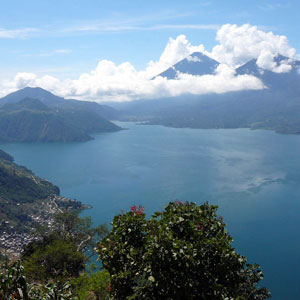 west by Mexico, on the southeast by El Salvador and Honduras, to the northeast with Belize and the Caribbean Sea and the south by the Pacific Ocean. The landscape is predominantly mountainous and heavily wooded. A string of volcanoes rises above the southern highlands along the Pacific, three of whom are still active. Within this volcanic area are basins of different sizes containing the majority of the population. The region is drained by rivers flowing into the Pacific Ocean and the Caribbean. The basin west of the capital has no mouth of the river and therefore has formed Lake Atitlán, surrounded by volcanoes. To the northwest, right on the border with Belize and Mexico, lies the low undulating tableland of El Petén, 36,300 square kilometers (14,000 square miles) of almost inaccessible jungle covered with lush forests. This area covers about a third of the country, however, contains only 40,000 people.