The Republic of Guatemala is a Central American country bordered by Mexico, Belize, Honduras, El Salvador, the Pacific Ocean and the Caribbean. Guatemala is a treasure chest of Maya history, among

other things. The mountains are interesting places to explore like the markets and streets of the city.

An interesting place to visit in Antigua Guatemala is a beautiful city located amidst three volcanoes. Those who want unusual experiences tend to go to Lake Izabal or Nebai people from afar to maintain a Mayan village hidden in the recesses of the mountains of the Cuchumatanes and Lake Atitlan in the highlands. All these tourist destinations Gutemala are waiting to be discovered.

In Guatemala, tourists can find everything you can 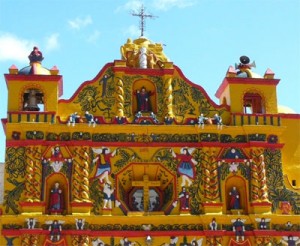 think about the Mayan culture. Take a look at the archaeological sites of El Petén and pre-Columbian city of Chichicastenango, where Mayan rituals have survived to modern times. The Secret of Santa Lucia Cotzumalguapa gives you an idea of the ancient pipil, with heads carved in stone, laminates and plantation fields. Guatemala is not the safest place and crime including armed robbery, rape and murder of tourists, unfortunately, has been reported in recent years. The tourist vehicles have been reported as a major target for thieves, but also thefts have been documented along the hiking trails. Therefore, in Guatemala it pays to be alert and watchful of the conduct of others. It is therefore important to avoid loading more money than you need. Do not wear flashy jewelry or display of other valuable items such as digital cameras and cell phones. And do not walk the streets of Guatemala City alone, especially at night.

The main city of Guatemala are: