San Jose is a lively and contemporary city that can compete with any other major urban center. Located in the heart of Costa Rica, the capital can not be

described as beautiful, but rather as addictive. Many tourist sites in the city of San José take the visitor to experience Costa Rica today. While much of the life you can find in San José is the same as small cities with prejudices. San Jose is the place where more than one third of the Ticos call “home” to San Jose and definitely worth seeing tourist treasures offered by San Jose.

San Jose is located at an altitude of 3,772 meters and was founded in 1737, but only became the capital in 1823. Since then, the city has expanded and developed at an alarming rate and now covers 4,965 square kilometers and has 350,000 inhabitants. There is much to do in the city and outside the popular tourist route to San Jose. So I recommend a lot of research before traveling to San Jose because it is hard to find in San Jose. To begin, read our next article about the best activities to do in San Jose.

Sights in the city of San Jose:

There are a number of interesting museums in San José, including the Jade Museum, which houses the world’s largest collection of American jade and is a truly incredible spectacle. Similarly, the pre-Columbian Gold Museum displays an interesting mix of pre-Columbian gold and modern art and is also very popular in San Jose. Impressive contemporary art collection and a great design can be found at the Museum of Contemporary Art and Design in San Jose. Archaeologists should be directed to the National Museum of San Jose. The impressive National Theatre are also worth a visit when traveling to San Jose, because this theater was built in 1897, this spectacular building oozes greatness with its neoclassical design, elaborate columns, frescoes and statues.

San Jose is also a fun place to shop, with lots of different markets to explore. While it is best to get your memories in less touristy areas, the Central Market of San Jose is a great place for a drink, eat or buy something of good quality, such as coffee beans from Costa Rica. In the central area is the Central Bank on the Plaza of Culture and is a very nice area of San Jose that is worth visiting, also is a pedestrian zone and therefore is a less polluted area.

Entertainment in the city of San Jose:

San Jose is home to the most eclectic mix of tastes and influences in the country. There are many restaurants where you can enjoy international food (and lots of fast food) if you are fed up with culinary staples of rice and beans from Costa Rica. 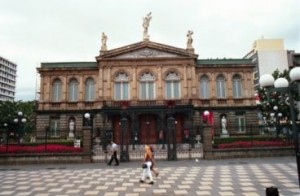 San Jose is also home to the National Symphony Orchestra, in addition of being a city fan of disco. What is certain, however, is that the party is later in the morning, so bring to San Jose on your dancing shoes and nice clothes to meet girls in Costa Rica.