The National Parks of Costa Rica are its greatest glory. Costa Rica authorities have designated a third of the country as protected areas, and dozens of private nature

reserves have helped to increase Costa Rica to be the star of ecotourism. Costa Rica has an impressive variety of landscapes, micro climates, flora and fauna, and nature lovers will not be disappointed with all the unique fauna of Costa Rica. Visitors looking for an active vacation will have many places to choose from in Costa Rica. In Costa Rica there are options for white water rafting. In Costa Rica also you can do surfing. In urban areas, the Spanish Heritage in Costa Rica provides the main features of interest, although relatively few sites in Costa Rica.

Christopher Columbus landed in what is now Costa Rica in 1501.Under the government of the General Tomas Guardia between 1870 and 1882, Costa Rica developed many of its main features modern, notably the minimal role of the Catholic Church in secular matters and an adherence to the principles of democracy. 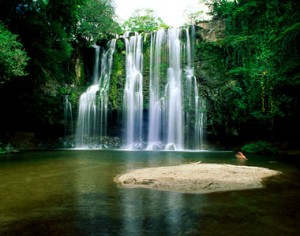 Throughout the 20 th Century, Costa Rica has enjoyed peace and a steady growth in prosperity, with the notable exception of a civil war in 1948, which followed the presidential election. Significantly, Costa Rica is the only country in the region to have abolished the national army.

In recent times, one of the most prominent political figures has been the President Oscar Arias Sanchez, who was awarded the Nobel Peace Prize in 1987 for the success of bringing warring parties elsewhere in Central America to negotiating table.

possible to note the formation of high mountains, steep volcanic origin in the Pacific Northwest and central Costa Rica. The southern half of Costa Rica is dominated by mountains of tectonic origin, the highest peak is the Chirripó Grande, which reaches 3,820 m (12,530 feet). More than the half of the population lives in the Central Plateau, a plateau with a pleasant climate. San Jose, Costa Rica is the setting for the nation’s capital. There are lowlands on both coastlines, mainly swampy Caribbean coast, with savannah and dry forest in the Pacific Northwest merge into mangrove and rainforest southward. The rivers flow through the mountains and the Caribbean and the Pacific.