Santa Ana is the second largest city in El Salvador, near San Salvador, and is located 64 miles west of the capital. The first name given to the city was “Priestesses City.” Later this

city was given the name of “Santa Ana” by Bishop Fray Bernardino Villalpando. On May 22, 1824, the city was proclaimed the capital of the province of Sonsonate, by Executive Order. Twenty years later the province of Santa Ana was re-christened with its present name.

The city has a population of 490,000 inhabitants and is situated at 665 meters above sea level, covering 2,023 square kilometers. It is known today as a region rich in sugar, coffee and livestock due to its excellent location in the valley Cihautehuacan. Santa Ana is much quieter than San Salvador, and its climate is milder.

This makes the city a great place to relax, if you are 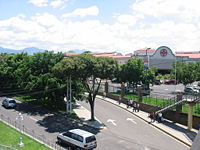