Explored by Columbus on December 6, 1492, Haiti’s native Arawaks fell victim to Spanish rule. In 1697, Haiti became the French colony of Saint-Dominique, which became a major producer of sugar cane, depending on the slaves. In 1791, an insurrection erupted among the slave population of 480,000 natives, resulting in a declaration of independence by Pierre-Dominique Toussaint Louverture in 1801.Napoleón Bonaparte suppressed the independence movement, but finally triumphed in 1804 with Jean-Jacques Dessalines, who gave the new nation the Arawak name Haiti and this was the first independent black republic.

The revolution wrecked Haiti’s economy. Years of struggle between light-skinned mulatto dominated the economy and the black majority population as well as conflicts with neighboring Santo Domingo, resulted in the backwardness of the nation’s development. After a succession of dictatorships, Haiti bankruptcy took payments from U.S. Customs from 1905 to 1941. The occupation by U.S. Marines from 1915 to 1934 gave the country stability and the population of Haiti growth and became the most densely populated nation in the Western Hemisphere.

In 1949, after four years of democratic government of President Dumarsais Estime, dictatorship returned to the command of General Paul Magloire, who was succeeded by François Duvalier, known as “Papa Doc” in 1957. Duvalier’s secret police, the Tontons Macoutes, “said political stability with a brutal efficiency. After Duvalier’s death in 1971, his son, Jean-Claude, or “Baby Doc”, succeeded as ruler of the hemisphere’s poorest nation. In the decade of 1980, Haiti became one of the first countries to cope with an AIDS epidemic. Fear of disease caused tourists to stay away, and the tourism industry collapsed, causing increased unemployment. The disturbances generated by the economic crisis forced Baby Doc to flee the country in 1986.

Despite the intervention, Haiti’s infrastructure lay in ruins. Throughout the decade of 1990 the international community tried to establish democracy in Haiti. The first governor was elected Jean-Bertrand Aristide, a leftist Roman Catholic priest who seemed to promise a new era in Haiti, took office in February 1991. The military, however, took control in a coup nine months later. A force of UN peacekeepers, led by the United States defended democracy finally arrived in 1994. Aristide was restored to office and René Preval became his successor in the 1996 elections. U.S. soldiers forces and UN peacekeepers left the country in 2000. The government of Haiti, however, remains ineffective and the economy was in ruins. Haiti has the highest rate of AIDS, malnutrition and high infant mortality in the region.

In 2000, former President Aristide was reelected president in elections boycotted by the opposition and questioned by many foreign observers. U.S. threatened Haiti and other countries with sanctions unless democratic procedures have been strengthened. Aristide, who was a very charismatic person of democracy, became more authoritarian and seemed unable to improve the lot of his people. Violent protests rocked the country in January 2004, the month of the bicentennial of Haiti, with protesters demanding that Aristide resign. In February, an armed revolt was underway, and kept Aristide in power. The protests, groups of armed rebels, and French and American pressure led to the ouster of Aristide on February 29.Since then an international force led by the United States entered the country in chaos to try to restore order and an interim government took over. In September, Hurricane Jeanne devastated Haiti, killing more than 2,400 people. Lawlessness and gang violence were widespread, and the interim government had no control over some parts of the country, which were run by armed former soldiers. 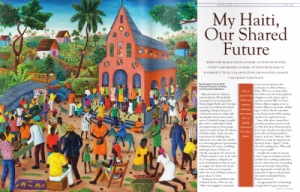 After numerous delays, Haiti held elections on February 7, 2006. The election, with the support of 9,000 United Nations troops, was seen as a crucial step in the return of Haiti to a semblance of stability. The former prime minister and Aristide protégé, René Préval, very popular among the poor was seen as the favorite. But when the election recount that led to Preval said to lose about another candidate realized he would not win an absolute majority, Préval challenged the election and alleged that there was “massive fraud and gross errors had stained the process . February 14, the interim government halted the election recount, and the next day, after the votes are reset everything and Préval was declared the winner.

In April 2008, Prime Minister Jacques-Edouard Alexis was removed from office by the Senate, which made him responsible for the bad economy. President Rene Preval has designated Ericq Pierre as prime minister, but the lower house of parliament also rejected Pierre. In July, Parliament approved the nomination of Michele Pierre-Louis for Prime Minister and became the second woman prime minister of Haiti.

The Senate voted in November 2009 to topple Prime Minister Michele Pierre-Louis, which was considered by international donors as a competent leader who can efficiently and effectively use aid to improve Haiti’s infrastructure and boost the economy . The Senate, however, argued that he had not done enough to lift Haiti out of its almost constant state of misery. She was replaced by Jean-Max Bellerive.