Liberia, Costa Rica is the capital of Guanacaste province, the most traditional region around the country. This province is visited mainly for its stunning beaches and resorts in expansion. However, it is also known for 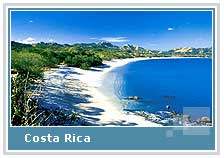 ranches cowboys, livestock and food typical of Costa Rica. Liberia is a classic of Costa Rica, unchanged by the arrival of mass tourism and urbanization and its brilliant white houses and places very refreshing.
Liberia is also a very convenient place to start or end your adventure in Costa Rica because the Daniel Oduber Quirós airport is only 12 km east of the city.

Sights in the city of Liberia

Central Park: This park is very attractive to get a little shade from the midday sun and watch the daily lives of Tico.

Liberia is home to two very different churches, the Church of the Agony is a church beaten and abused by the passage of time that has hung on despite numerous earthquakes and peeling yellow paint which is rather nice. And then we can also find the Church of the Immaculate Conception of Mary, by contrast, is a modern building that stands out like a sore thumb among its traditional setting, but somehow it works to complement the urban landscape.

Sabanero Museum: Pays tribute to the tradition of cowboys in Guanacaste.

Real Street: This street has the best maintenance of colonial buildings and makes for a pleasant stroll.

The city of Liberia is also a door perfectly placed to enjoy the beaches and national parks of the beautiful province of Guanacaste.

Entertainment in the city of Liberia

Liberia has a wide selection of restaurants and is one of the best places in Costa Rica to test traditional Tico food as “gallo pinto” and “married.” The influence of jeans has also led to a heavier type of cooking and filling soups or rural Guanacaste definitely worth a try.’Pudding’ is extremely popular and is cream with eggs or rice and beans and tortillas.

At night, Las Tijana is without doubt the most popular bar and sometimes live music is played while Kuru Kuru is a salsa club. The film is also a popular choice in the weekend, as it is located right in Central Park.