houses and the tradition of the pirates. All this tourist attractions plus more than 900 kilometers of coastline along its coastline make Dominican Republic a great tourist destination to travel. On the island of Dominican Republic you can take a cable car to Mount Isabel de Torres and basking in the stunning Saona Island.

The Dominican Republic is divided into twenty-nine provinces and regions, and the National District is the thirty provinces. In addition, there are actually two cities that are most important in the country, “Santo Domingo”, which is the capital of the country and most populated of the city and “Santiago de los Caballeros, the second largest city located in the northwest portion of the country, near what might be called the nation “region of snuff.”

The most important cities in the Dominican Republic are: 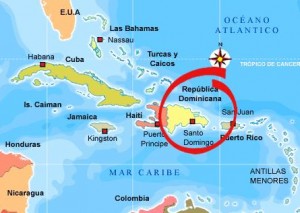 Map of Province and cities of Dominicana Island