When to go and weather Guatemala

Guatemala’s climate is tropical and subtropical, but varies in relation to altitude. In the highlands, between 800 and 1600 meters above sea level, where the major

population centers in the country, the climate is mild throughout the year, with average minimum temperatures ranging between 12 ° C and 16 ° C, maximum and average temperatures between 29 ° C and 22 ° C. Rainfall is concentrated in the months between May and October while the dry season from November to April. In these areas the average annual precipitation is around 1,300 mm.

In the mountains above 2000 meters, temperatures drop 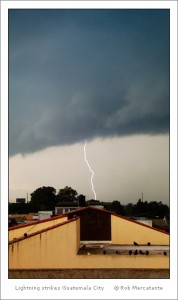 significantly with average temperatures between 5 ° C and 14 ° C and recorded differences in temperature between day and night.

In the Pacific Ocean coastal areas and the plains of the Petén, the climate is tropical, the temperature never drops below 25 ° C, with highs in the summer (July) 30 ° C to 32 ° C, and average annual temperature around 28 ° C. In this area the average annual precipitation is about 1500 mm, in these areas at times during the rainy season (May to October) can produce violent cyclones.

The northern region is the rainiest, with averages ranging from

1500mm to 2500 mm and the highest peaks of rainfall in the country most exposed reliefs.