San Salvador is the largest city in El Salvador and the second largest city in Central America. The population is impressive, with 1,479,000 people. Spanish Pedro de Alvarado founded the city in 1525.

It became the capital in 1839, and has a history plagued by natural disasters and civil wars. The city is located in the southwest region of El Salvador and is a combination of beautiful places and monuments and contemporary buildings and other colonial architecture. Contaminated noisy streets and dilapidated buildings also marks the style of San Salvador.

The city has undergone several reconstructions after earthquakes and civil wars that have been the source of significant destruction of El Salvador. The city of San Salvador, contains numerous high-rise buildings, however, most historical sites have been destroyed in the earthquakes that have beaten the city. 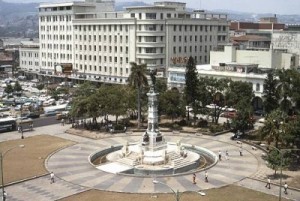 The city offers many attractions for tourists, for example can see tourist attractions such as the National Treasury, the shopping center Plaza Barrios, La Catedral, the National Palace and National Theatre. The Pan American Highway passes through San Salvador, adding to other metropolitan regions in Central America and the United States. The city remains the economic center of the nation and half of the wealth of El Salvador is San Salvador. The town has manufactures textiles, soap, beer and snuff.