Havana, with a population of 2.4 million inhabitants, is the capital of Cuba.

Not only is the largest city in Cuba, but also serves as a trade center because it has the country’s main ports. Government offices, ministries, and corporations are based in Havana, Cuba. Fruits are abundant in Havana because of its tropical climate. The average temperature in the city ranges from 28 degrees Celsius to 10 degrees Celsius.

Havana is composed of La Habana Vieja, Vedado and Havana New. La Habana Vieja offers tourists a taste of the rich traditions of Cuba, especially seen in the residential houses line the narrow streets. But it is also the center of the industry. The neighborhood of El Vedado is full of shopping centers.

El Centro Habana, located in a part of Vedado, is where the working class are mostly left to live. Finally, the new Havana is where the rich people. Most tourists can be found in this area occupied by shops and country clubs.
Havana is a city rich in historical monuments. La Fortaleza de San Carlos de la Cabana is a fortress built during the colonial period in the 18 th century. The National Capitol is not only a huge structure in the Senate and House of 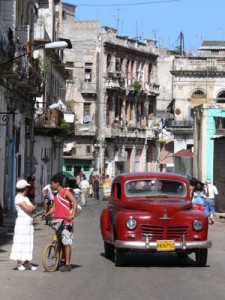 Representatives, but also houses the third largest indoor statue in the world, and this is known as the Statue of the Republic. The Christ of Havana is a marble statue of Jesus carved by Jilma Madera.

The cultural wealth of Havana can be seen at the Grand Theatre of Havana which houses several local and international events.