Music of Belize – The Garifuna:

Garifuna culture in Belize shows many influences of his African heritage, and this is very evident when comparing his music with the indigenous music of African societies from which their ancestors originated the music of Belize. According to one source, most of the slaves brought to the Caribbean were taken from Nigeria in West Africa, and from further south from the Congo and Angola.

The drums of the music of Belize

Moreover, the importance of the battery in Garifuna music is another similarity to the African influence. The music of Belize depends largely on the drum, and in many cases, their music is dictated by it. Many times a particular drum has a style of calling for two batteries (with the exception of sacred music, which typically uses three).Typically, a drummer will play a fixed and constant pattern. This battery is often called the second player.

Another tricky part of the music of Belize is composed of patterns that normally play with the player first. The

drums of the Garifuna of Belize are generally made of hardwood and cut evenly at the centers. The ends of the battery, either one or two drums, covered with skins of wild boar, deer or sheep. These drums are always played with the hands, and some batteries have metal wires wrapped around the patch to give a snare drum. Belize Musicians accompany the drums with maracas pumpkin Sisira calls, and even instruments like guitar, flute, violin and have adopted rhythms of French music, English and Spanish folk music, as well as music from Jamaica, Haiti and styles of Afro-Caribbean.

Song and Dance of Belize:

In accompaniment to the music traditions of Belize are the Garifuna songs and dance styles, which are an integral part of their culture. These songs and dance styles that are made by the Garifuna show a wide range of topics such as work songs, social dances and traditions. Some of the work songs include Eremwu Eu, sung by women as they prepare to make cassava bread, and Wadauman Laremuna, a song that men sing regularly when working collectively together. 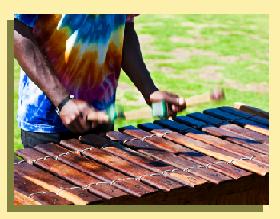 As for the songs and dances of Belize in the social context as Gunchei pieces are quite common. In this style of dancing men take turns dancing with each woman. Another very popular dance style in Belize by the Garifuna in Belize are the Sellam Punta Music. According to one author Garifuna this style is the most popular dance performed at wakes, parties and other social events. It consists of different couples trying to dance seductively with more style and hip movements and trying to dance better than the other competitors. Most of the songs and dances of modern Belize retain many traditional pieces.