Music from Honduras is one of the best examples of the diversity of the country. The styles vary from culture to culture. These range from local issues, Garifuna music to different Caribbean styles like merengue, reggae, reggaeton and salsa.

and bands that demonstrate the different styles of music in Honduras. Some bands and artists from Honduras have been around for years and are known around the world, as Khaoticos (Khaos, from San Pedro Sula), beetles, Fruit Loops, and Extreme Rock Latino.

Other artists from Honduras are relatively recent as the growing popularity of Reggaeton, Honduras has been a lot of new artists of this musical style. Some of the most popular artists are “The People” and Raggamofin Killas.

Yerbaklan the famous musical band of Honduras is working on producing a new album and will be giving a concert on August 5 in San Pedro, Belize. They will be on stage to delight your heart.
When it comes to the music of Honduras should be noted that with a fusion of rhythms of reggaeton and urban music, Cesar Castañeda (Csarec) of San Pedro Sula, and Jaime Colindres (Jimmy James) in Tegucigalpa, has become one of the most popular duos in Honduras. Jimmy James Csarec and both dreamed of being artists singing from a very young age, writing his own lyrics and making his own music. Finally merged their styles and became what is now known as “Yerbaklan.” 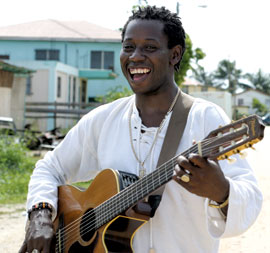 These young musicians from Honduras, have been influenced by artists like UB 40, Boyz II Men, Vico C, El General, Nando Boom and Shabak. They got their start in 2004 when they were included in a compilation called “Legend 2.” This production catapulted them through media such as print, radio and television, both locally and internationally. In 2005, they were recognized as “Duo”, and got a hit “The Cowgirl.” Even have traveled and performed in Honduras, Guatemala and San Pedro, Belize and Costa Maya.

They have been fortunate to be opening performances by artists like Calle 13, Don Omar, Daddy Yankee, Rakim y Ken-Y Tito “El Bambino”. In 2008, there was a concert of music from Honduras in Honduras, and is band caught the attention of a U.S. label “Xatruch Music. It is so recorded their first album, called “First Class”, and if the hits “Sexy Girl” and “Loving You” were included on that disk. Another success of this band of Honduras is the song “First Class” a success and a hit from this talented duo.