Tours and Travel information for Cuba

With the lure of reaching the figure of two million visitors in record time, Cuba is preparing to make the VIII International Meeting on Nature Tourism, Turnat 2011, from 26 to 30 next at the Midwest.

Over 250 representatives from 11 nations in America and Europe have confirmed their participation in the event, which will be the busiest of the island held by the organizing committee sources.

The expert meeting will promote destinations distinguished by its natural attractions in the provinces of Villa Clara, Cienfuegos and Sancti Spiritus, territories that stand out for attractive landscapes of valleys, mountains, coastal cliffs, waterfalls, rivers, waterfalls, and numerous species of birds and vegetation.

As part of the program, participants will visit the Hanabanilla protected natural landscape in Villa Clara noted for its rich resources of flora and fauna and important watersheds draining into a reservoir between the mountains.

Travel Cuba
Another scenario is to learn about El Nicho, Cienfuegos, one of the most attractive sites Guamuhaya mountain range that has a system of waterfalls and water from rivers and springs.

He also will travel specialists and Topes de Collantes National Park Caguanes, biosphere reserves, both in the province of Sancti Spiritus, especially the valleys and mountains and impressive waterfalls.

Participants will have the opportunity to also compete in a photography contest that will witness the unique sites visited.

Turnat meets every two years in a different scenario of the nation and an important promotional display to Cuba for the development of nature tourism.

The new edition will take place a few days of Cuba arrived at the figure of two million foreign visitors reached last September 17 for the eighth consecutive time, and with 32 days in advance compared to the same event last year. 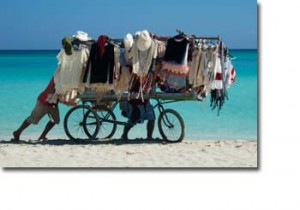 Canada is the largest source market of tourists to the island, and the UK, the largest in Europe, according to official figures.
The growth of international tourism is one of the main goals for the island, which this year hopes to receive 2.7 million vacationers.

Considered the second activity of foreign exchange earnings to the island after the technical and professional services, tourism revenue in 2010 reported $ 2.1 million for the stay of 2.5 million foreign visitors.

The Cuban tourism is around 52,000 rooms in approximately 300 facilities, most of them four and five star category.
Cuban Tourism Minister Manuel Marrero, believes that a multi laínsula “complete and unique,” where nature, history and people’s cultural values are combined. (Xinhua)