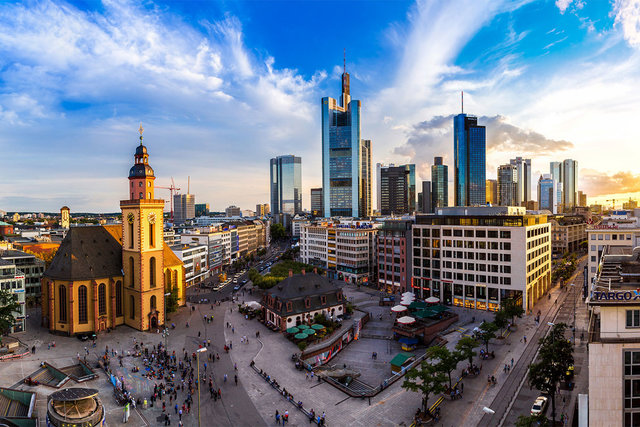 Living, studying or working in the Main metropolis? There are many good reasons for that.
Already at the entrance to the Frankfurt main station, the busiest terminus station in Germany, you can see the towering towers of the Frankfurt skyline.
The Messeturm, the double towers “Soll und Haben” of the Deutsche Bank, further skyscrapers of the big banks, the European Central Bank and other skyscrapers … They all symbolize one of the reasons to move to the Main metropolis:

THE ECONOMIC POWER
The transport industry with the largest German airport, the financial sector, insurance, chemical and technical industry, services, IT and culture – Frankfurt and the entire Rhine / Main metropolitan region are one of the job engines of our country.
Added to this is the excellent infrastructure, so that commuters from the surrounding communities in the Taunus, in the Rhine-Main Plain, from Offenbach, Hanau, from Hofheim, Neu-Isenburg or Mainz simply get to Frankfurt.

Unfortunately, the rental and purchase prices in many districts of Frankfurt and the surrounding area are correspondingly high. If you invest a lot in your new home, you can save on the move – with relocation helpers in Frankfurt.

The soon-to-be Brexit also means that further financial transactions are shifting from London to Frankfurt. This will probably also create new jobs after the banking crisis has been overcome,so don’t wait and book flights to Frankfurt from London without any hesitance.

THE CULTURE AND EDUCATION
One of the most important birthplaces of German democracy, the Paulskirche, is located in Frankfurt. The first German National Assembly, forerunners of today's Bundestag, met here.
The cradle of one of the greatest German poet and thinker, Johann Wolfgang von Goethe, was also on the Main. The university is named after him. In addition, there are around a dozen other colleges and university-type educational institutions in Frankfurt.

Once a year, the Frankfurt Book Fair attracts tens of thousands of reading friends and cultural professionals to the city. In addition, there are other fairs of national and world importance as well as opera, theatre and cabaret.
On the south side of the river Main, the museum bank attracts visitors with Städel, Filmmuseum, Bibelhaus Erlebnismuseum and many other cultural sites. When you move to Frankfurt with children.

Be sure to look at the kindergarten and school structure: More than 170 schools for children, trainees and adults, alternative forms of education such as Montessori and Waldorf schools and other educational institutions of private and state carriers offer a wide range.
The integration of Frankfurt’s new citizens, who often come to the Main from all over the world, and the inclusion of students with handicaps are also reflected in the Frankfurt school landscape.

SHOPPING AND ENJOYING
The Frankfurt Zeil is one of the busiest and busiest shopping streets in Germany. In addition, there are many small shops in the districts such as Sachsenhausen.
Culinary Frankfurt has almost everything to offer the kitchens of the world: Fine restaurants with international cuisine, Asian,
African, countless Turkish, Italian and Greek restaurants and of course down-to-earth, Hessian-cosy inns, where beer and Äppelwoi are enjoyed.
Young New-Frankfurters are looking forward to the lively club scene – everything from house, electro and techno to rap, rock, indie and metal.

NATURE IN THE CITY AND IN THE SURROUNDING AREA
Let the glittering skyline of “Manhattan” impress you, but do not distract you: Frankfurt also has quaint, green and almost contemplative corners in the city: for example, the bridge district characterized by old buildings, which has blossomed into a trendy district.

The surrounding area is full of forest and hiking paradises, including the Taunus with adventure trails, barbecue areas, the Bad Nauheim sculpture park and the highest Taunus summit, the wooded, 881 meters high Feldberg; or cycle through the gently undulating landscape of Wetterau.

Jog in Frankfurt through Brentanopark or Stadtwald, stroll in the Chinese Garden or Rothschild Park. Day-trippers also enjoy walks through the southeast of Frankfurt Spessart, one of the largest mixed forests in Germany and former home of the legendary robber gangs.

THE SPORT
Frankfurt Eintracht is one of the most traditional football clubs in Germany. Fans in the arena regularly flock over 30,000 to 48,000 fans with their Bundesliga elf. Frankfurt is also a stronghold of basketball, volleyball, ice hockey, American football, cycling and many other sports.
Almost 500 clubs with more than 150,000 members offer recreational and recreational sports for everyone. In the city, there are about 180 sports halls!
And every year runners meet for the City Half Marathon, the Frankfurt Marathon and many other running events.
Now there is only one thing left to do: relocate to Frankfurt for your own personal reasons! And alone, with partner or family full start!
Maybe before going to Frankfurt, you want to visit and listen to the music from Panama and to enjoy the beaches and the amazing places.
AUTHOR BIO:
This article is written by M Taha Khan. He is a professional blogger and content writer who writes for different blogs as a guest author. He is a passionate traveller, football lover and a digital marketing executive.