With eight and a half decades of life, the communist leader celebrates a year of life doomed to seek recovery of Hugo Chavez, his friend and closest ally outside the island.

Fidel Castro meets tomorrow 85 years, dedicated to monitoring the medical treatment he is in Havana Venezuela’s President Hugo Chavez, while his followers are 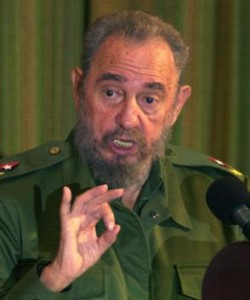 preparing to spend three hours a day serenade and opponents do not cease to curse him, five years after have given the government for health reasons.
Since Chavez’s disease in June, Fidel stopped writing his “Reflections,” dedicated primarily to evaluate international problems, and became much less frequent presence in local media, through pictures or film images, usually taken asresidence.

Fidel Castro and his actual condition:

The last-thin and hard of locomotion, but lucid and talkative, he was seen with Hugo Chavez when he confirmed that he had been operating “successfully a tumor” cancer

on June 20 and since then has made Full recovery of principal friend and ally, the main goal of his life.
Experts say that the man who for 47 years led the rise of socialism in Cuba and challenged to ten successive administrations in Washington, “now has his sights set on re-election of Chavez in the elections of 2012, and from the advantages granted have no office dedicated to this most of his time. ”
Some even believe that public treatment has been given to Hugo Chávez’s disease and two courses of chemotherapy in Havana, the second is in progress, to prevent a recurrence of malignant cells, has had a “positive impact “in the popularity of Venezuela with a view to the election and another election.Venezuela is Cuba’s economic mainstay, with supply at preferential prices to half the oil consumed and funded major multi-million dollar strategic project in the Caribbean country, experts say.

Fidel Castro last news:
And while Fidel, away from the glare of the press seems immersed in geographically distant issues, his brother, President Raul Castro, 80, headed since 2006 the biggest change process in memory since the triumph of the revolution in 1959 on the basis of reducing the weight of the state in national life and promote the coexistence of public property, cooperative and private, as the only way that socialism transcends and connects to globalization.

Fidel Castro adn information about his life:
There are few Cubans who think that if the changes promoted by the President fail to materialize, “ten or twenty years from now, without firing a single shot, they’ll settle in Miami,” the anti-Castro exile called capital, whose the more conservative these days are devoted to neutralize the faint footsteps of openness Barack Obama, whose green light to remittances and free travel for Cuban-Americans have made the sector the second largest source of tourism income International on the island, after the Canadians.
In this context, to the left “not only in Latin America but elsewhere, the main reference is Fidel,” they said on Wednesday the organizers of the “Serenade to fidelity,” Oswaldo Guayasamin Foundation, based in Quito – and the realization of the unique concert on Friday night at the theater Karl Mark of Havana, with television transmission within and outside the island, pointing in that direction. “Fidel is not innocent of the political map is changing in Latin America,” said the veteran Uruguayan singer Daniel Viglietti, one of the participants in the serenade by the Cuban duo Buena Fe, wide popularity on the island, with its lyrics criticism of the national reality.

Fidel Castro and his relation with the politics nowadays:
No one knows whether Castro will attend the celebration – “He is the only one who can make that decision and has not taken,” said Pablo Guayasamin-but the fact is that far from the publicity that accompanied him for almost half a century, this manGalician ancestry and life dedicated to politics, passions still moving, as if 20 or 30 years.

More information about Fidel Castro:
“Castro is primarily responsible for all the ills of Cuba”, say his enemies, who on Saturday August 13th, surely, fingers crossed again to see if further resolved that they have not. Other Cubans, even supporters of the revolution, believe that “Fidel waited too long to withdraw” from power, and not a few still today, or much younger Boomers, they return to proclaim, “Pa’l it, Fidel , pa’la it “as was routine in those hard times of 1960 when the opposition in Cuba was done with bombs and revolution was a utopia that aroused the support of the most diverse sectors of the island society.